X86 CPUs boot up in a very bare state. They execute the first instruction at the top of memory mapped flash in 16 bit real mode. DRAM is not avaible (AMD Zen CPUs are the exception) and the CPU typically has no memory addressable SRAM, a feature which is common on ARM SOCs. This makes running C code quite hard because you are required to have a stack. This was solved on x86 using a technique called cache as ram or CAR. Intel calls this non eviction mode or NEM. You can read more about this here.

Coreboot has support for setting up and tearing down CAR with two different codepaths:

In coreboot the open source implementation is the most used one. For instance all Google chromeos platforms use it, so it's well tested.
FSP is a propriatary binary provided by Intel that can be split up into 3 components: FSP-T (which is in charge of setting up the early execution environment), FSP-M (which configures the DRAM controller), FSP-S (further silicon init). With the FSP codepath in coreboot you call into FSP-T using the TempRamInit API to set up the early execution environment in which you can execute C code later on. This binary sets up CAR just like coreboot does, but also does some initial hardware initialisation like setting up PCIe memory mapped configuration space. On most platforms coreboot is fully able to do that early hardware init itself, so that extra initialisation in FSP-T is superfluous.

After DRAM has been initialised, you want to tear down the CAR environment to start executing code in actual DRAM. Coreboot can do that using open source code. It's typically just a few lines of assembly code to disable the non-eviction mode that CPU is running in. The other option is to call FSP-M with the TempRamExit API. See FSP v2.0 spec for more information on TempRamInit and TempRamExit . Sidenote: running FSP-T TempRamInit does not necessarily mean you need to run TempRamExit, as it is possible to just reuse the simple coreboot code. This is done on some platforms to avoid problems with TempRamExit.

It's generally a very bad idea to give up control of setting up the execution environment to external code. The most important technical reason to not do this, is because coreboot needs to be in control of the caching setup. When that is not the case you encounter all kinds of problems because that assumption is really baked in to many parts of the code. Coreboot has different stages: bootblock, romstage, ramstage and those are actually all separate programs that have their well defined execution environment. If a blob or reference code sets up or changes the execution environment, it makes proper integration much harder. Before Intel started integrating FSP into coreboot, AMD had a go at integrating their reference code, called AGESA into coreboot. Even though AGESA was not provided as blob but as open source code, it had very similar integration issues, for exactly this reason: it messed with the execution environment. As a matter of fact, Intel FSP v1.0 messed up the execution environment so badly that it was deemed fatally flawed. Support for FSP v1.0 was subsequently dropped from the coreboot master branch. So for technical reasons you want to avoid using FSP-T inside coreboot at all costs.

From a marketting perspective FSP-T is also a disaster. You really cannot call coreboot an open source firmware project if even setting up the execution environment is delegated to a blob.

One of the reasons why there still is code to integrate FSP-T inside coreboot is for Intel Bootguard support. Here you can read more on our work with that technology. Open source CAR did not work when the Bootguard ACM was run before reset.

So with Bootguard, the first instruction that is run on the main CPU is not the reset vector at 0xfffffff0 anymore. The Intel Management Engine, ME validates the Authenticated Code Module or ACM with keys owned by Intel. The ACM code then verifies parts of the main bootfirmware, in this case the coreboot bootblock, with a key owned by the OEM which is fused inside the ME hardware. To do this verification the ACM sets up an execution environment using exactly the same method as the main firmware: using NEM.

The reason that open source cache as ram does not work is because the ACM did already set up NEM. So what needs to be done is to skip the NEM setup. You just want to set up a caching environment for the coreboot CAR, fill those cachelines and leave the rest of setup as is. Bootguard capable CPUs have a readonly MSR, with a bit that indicates if NEM setup has already been done by an ACM. When that is the case a different codepath needs to be taken, that avoids setting up NEM again. See CB:36682 and CB:54010. It looks like filling cachelines for CAR is also a bit more tricky and needs more explicit care CB:55791.
So with very little code we were able to get bootguard working with open source CAR!

Here you see no fspt.bin in cbfs: 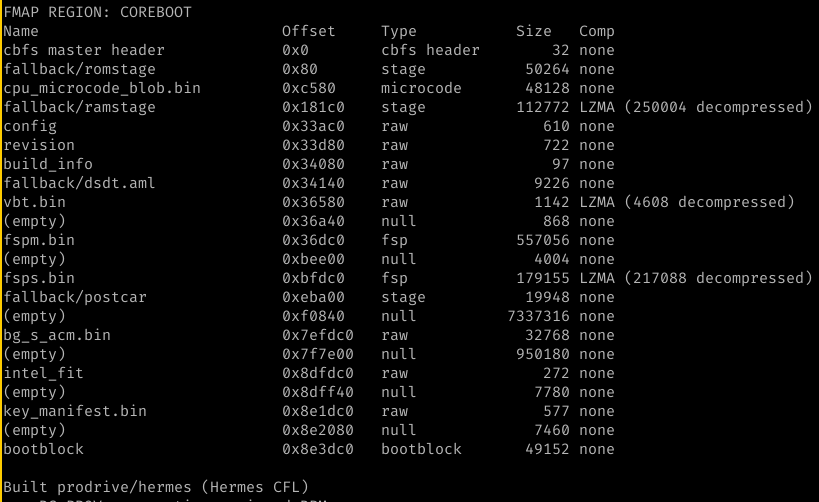 and here you see that bootblock is run with a working console and that romstage is loaded. This means that cache as ram works as intended. 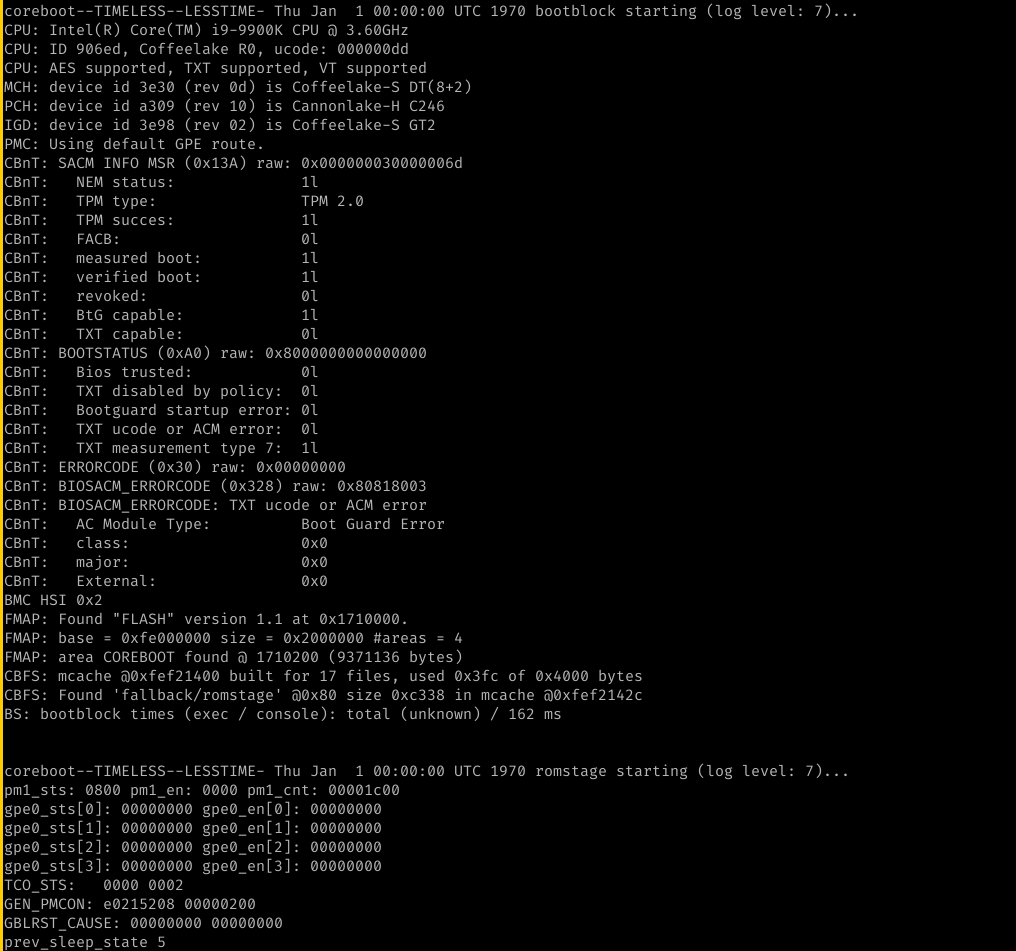 Given that all Intel Client silicon now work with open source cache as ram including Bootguard support, there are no reasons to keep FSP-T as a supported option for these platforms. There are however still Intel platforms in the coreboot tree that require FSP-T. Skylake-SP, Cooperlake-SP and Denverton-NS depend on the other early hardware init that is done in FSP-T for which there is no open source equivalent in coreboot. This makes FSP-T mandatory on those platforms, for the time being.

The advantages of being in control of the execution environment are overwhelming. From personal experience on working with the Cooperlake SP platform, we did regularly hit issues with FSP-T. Sometimes those were bugs inside the FSP-T code that had to be worked around. On other ocassions it was coreboot making assumptions on the bootflow that were not compatible with FSP being in control of the execution environment. I can firmly say that FSP-T causes more troubles than it actually solves, so having that code open sourced is the best strategy. We hope that by setting this good example with open source Bootguard support, others will be incentivised to not rely on FSP-T but pursue open source solutions. 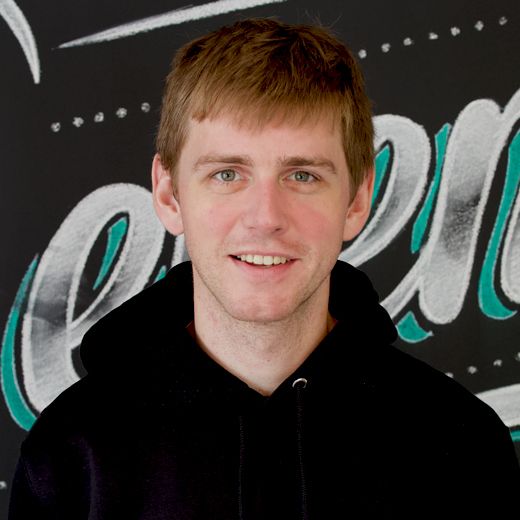